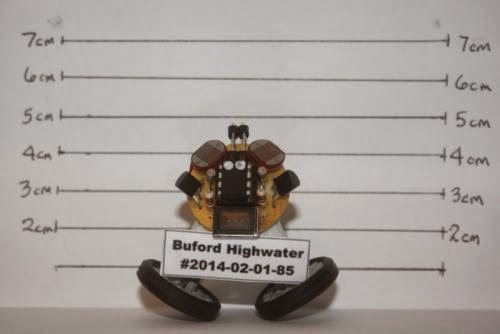 Yeah, that is a silly name for a big bad “Robot” but for some reason it just hit me while trying to piece him together and he’s a tiny fellow anyhow. Buford was really an afterthought when I finished Lilliputian. I had started the original Yahmez MicRObot challengeentry with the concept of a dual ATTiny85 bot, one for brain, other for motors but gave up and used a ProMini clone instead. After looking at the left over parts for a bit I thought surely I can throw something together with these. Besides I had yet to build any actual robot with one of the ATTiny85’s I’ve had for a while.
Update 01/04/2014 - Added Schematic at the Bottom
Buford’s Pants

Buford’s pants are a 3d printed mount found on Thingiverse. I found the part some time ago but never really had a good plan for it. The GM15 gear motors are actually too small for the mount and I didn’t really want to burn time modifying the part so I wrapped them up in some green electrical tape. Once the pants were done I thought a 3.7v 240mah LiPo battery might make a good “backbone” so the hot glue gun came out and he was now upright.
Buford is a pretty minimalistic bot featuring the two GM15 gear head motors mounted in the “pants”, the battery forming the backbone and some small 3D printed “third legs” to hold him up. The wheels are Lego gears and the tires were from Lego as well I believe or maybe somewhere else. For driving the motors a couple 2N2222 transistors were used which allow only forward motion for each side. Seemed the only way to keep things small enough for the platform and is very easy to do. 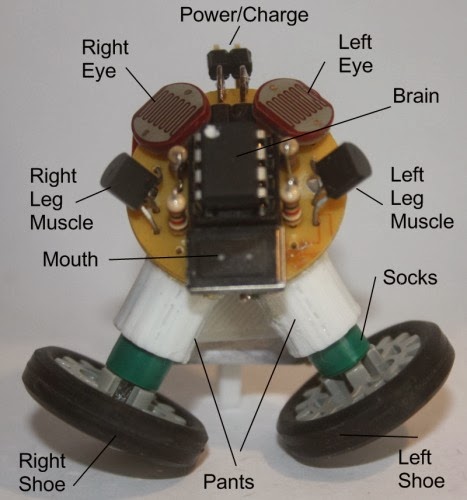 Buford’s Head
With the 8 pin socket for the ATTiny85 in the middle I sketched out a layout to allow two LDR’s for eyes, a couple transistors to drive the motors, matched up the needed resistors for the LDRs and transistors and then mounted an IR sensors below for his mouth like feature. After digging around for ATTiny85 IR code online and thinking about how Buford was going to be a mute with no sound output as there were no more I/O pins, I decided to change out the IR receiver and put a tiny speaker I had salvaged from an old cell phone. The tiny square speaker mount fits nicely below the Tiny chip and although not loud, provides enough noise to make him a little more menacing… I mean annoying. 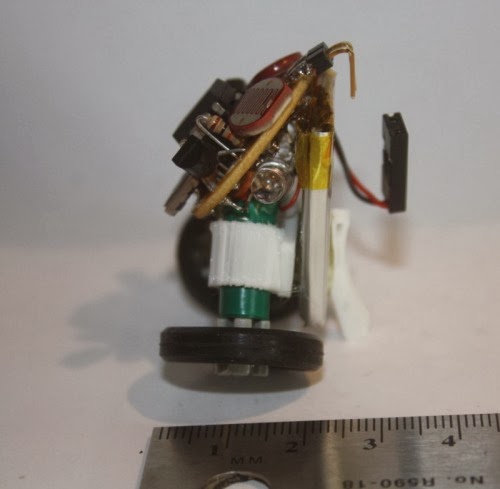 The back side of the board is a little messy, especially considering I took the time to draw up and layout the whole wiring scheme, followed it exactly and THEN realized I designed the LDR’s with the resistors going to the input pins instead of to ground. “Face palm” time. That error made me go back, cut up / out some of the wiring and get it right the second try.
To spice up his head I added a couple green LEDs in parallel to his drive motors on the back of the board which glow depending on how hard that motor is being driven. Because the GM15’s are pretty high geared and the wheels/tires are pretty large he is way too fast for his own good so the PWM rate is extremely low and hard to control but he does move at least.
To get power to the board I thought about a few options but did not have a tiny double throw on/off switch that would allow charging the battery in OFF mode so I just added a two pin header, extended it a bit to make it look like “hair” and added a connector to the battery wires. Kind of looks like a pony tail from the back.
I tried to make his board have some resemblance of a “face” with the two LDR’s up top for eyes, the 8 pin CPU for a nose and the speaker for his mouth. No clue what the resistors are, warts maybe. The two transistor kind of stick out there. I had thought about maybe some tiny hands but he looks good enough to me for now.
Buford’s Brain 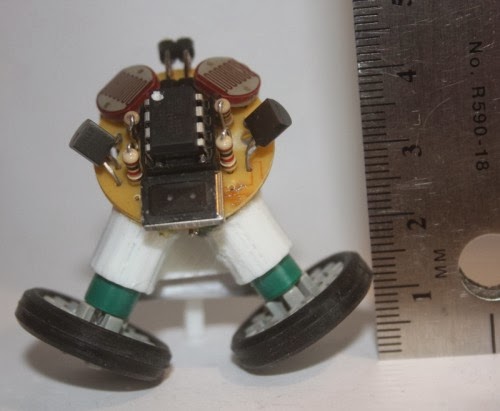 There’s not much there to start with but he does have 8K of empty space to fill so he can do a few things. He should be able to 1) Track Light; i.e. sit still and rotate to face the brightest until he is balance, 2) Hide from Light; same thing but avoid light, 3)Follow Light; move towards the brightest light until close enough, 4) Run from Light; turn away from the light and keep moving until dark enough.
I started to code up some options for selecting modes by covering up the LDRs, you can pretty easily do three different settings by fully covering up the 1) Left, 2) Right or 3) Both for three options. BUT then I really thought about how easy it is to swap out the ATTiny85 and how many of them I had here so I just changed variables and burned a chip for each mode. I can then swap them out as desired. Not optimal solution but quick and dirty way of making it happend.
So far Buford can track light and follow it in a kludgy but walking like wobble which I actually kind of like and turn away and run away from light. Nothing special for sure. There is still plenty of code space left with the current code taking about 3K of the 8K available. Unfortunately the speaker output is not very loud so trying to make much sound isn’t near as noticeable as I’d hoped. Additionally I guess the ATTiny85 doesn’t support the Tone() function to play musical notes so something else would have to be done to play any type of “music”, if you can call it that. 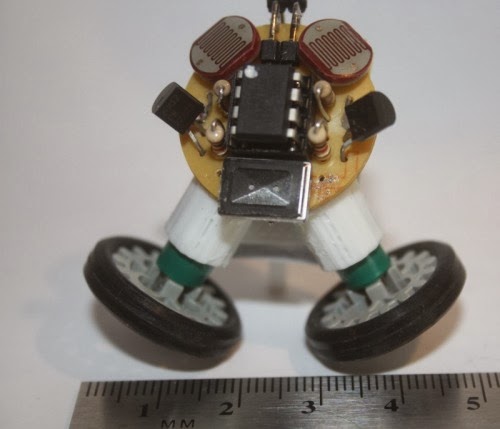 Wow, ok, there are a lot more parts there than I thought but it’s still pretty simple 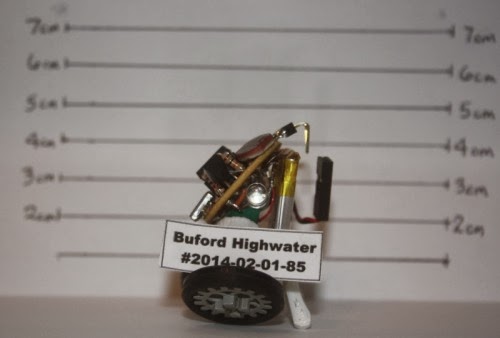 So there is Buford Highwater. Only took about 8 hours on and off total messing with ideas, code, etc to put it all together. I obviously reused code from my other bots for the base code, just stripped out all the other libraries and music functions that were not needed.

So he’s Buford, he’s bad, and he’s big… well, no, he’s actually tiny… ATTiny too but he’s still a menace.

Stay out of trouble Buford!

Update 01/04/2014 - Schematic
Maxhires has asked about the schematic and driving the motors etc from the ATTiny85 so here's how I did it. I'm sure there are btter ways out there but this does work. Notice I am driving the little speaker directly from a pin. I've done this for all my bots with sound without issues but remember these are tiny speakers so I would guess lower current. 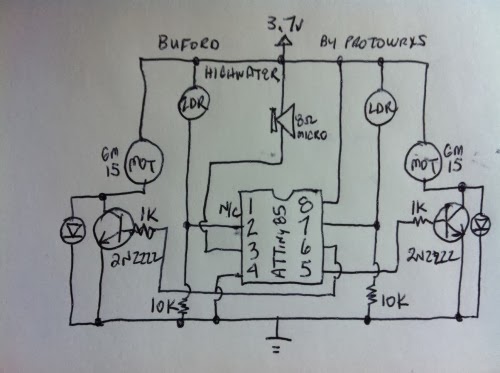