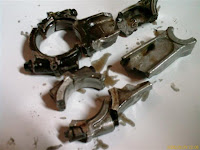 I sit in my car at the Sonic drive in enjoying the air conditioning, listening to the latest 'terrible' news of the world and nation and enjoying the comforts of my car while waiting for my food.

Not ten feet away sits a older man at the outdoor table. He looks to be late forties or so, close ot my age. His ragged clothes show his rough life, his scrubby beard has some gray tint to it and his skin is multicolored from unhealed scars of the past. He rocks back and forth in the summer heat.

Across from him in the chair sits a large light brown teddy bear, a red bow ribbon decorates it's neck with permanent smile sewn into it's face. It's brown eyes stare at the man and seem to have more compassion than those passing by as people zip in and out to get their food 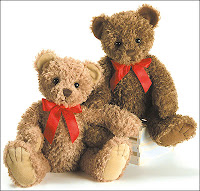 and car hops zoom past in a frenzy. It is an odd site for a summer day.

Before long he lifts himself out of his seat, pickups up the few coins on the table left from the drink he purchased and clutches his prescription medicine bottle as he prepares to leave. He then reaches over to the teddy bear that is still smiling and gently lifts the bear into his grasp as if it is a small child that needs special handling. The bear makes it's to his shoulder and seems quite content peering out. The man then wanders past my car with obviously no particular place to go. He makes his way past the other cars pulling in and out, changes direction, and then changes direction again before heading off down the street obviously looking for a place to sleep tonight.

A chill runs down my spine as the reality sinks in.

How did this man get into this situation? Someone brought him into this world... he was someone's baby... someone's toddler... and young adult, someone had to take care of him long ago.

What were their dreams for his life? What happened in those years that have past?

How did he get here today, with his teddy bear, his medication, and the few coins he had with him? What was his dreams? ... and where did they go?

Then it really hits me - this could have been me - or still could be me someday.
Posted by Stephen Nolen at 9:41 PM No comments:

Well at least the weekend was semi-productive. I managed to get a few things done that were hanging out there in my GTD list as well as a few that were not. I did managed to tune up the old TurboCoupe T-Bird with new plugs, wires, cap and rotor but ended up having to cough up extra money for a re-manufactured distributor after a mounting tab broke off while I was tak 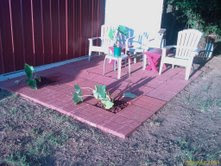 ing it apart. Oh well, it can't hurt anything in the long run. I also installed the new to me headlight switch and re-dyed the interior - helped make the car much more presentable. And now it smells like PAINT inside instead of smoke... for now at least.

Otherwise I finally finished out the little 'Tree Patio' that we use early in the morning for coffee and relaxing. Something that had been hanging around for a while. Nothing fancy, just a nice place to sit and enjoy t 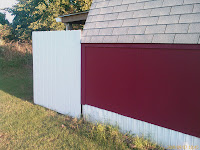 I also finally purchased and put up an extra fence panel to hide the 'Storage area' - that is code for the junk pile location for those that do not know. This blocks the view when you pull up and from the street so my other half should be a little happier.

As you can tell I used my @OUTSIDE and @TBIRD contexts over the weekend.. :-)
Posted by Stephen Nolen at 10:14 PM No comments: 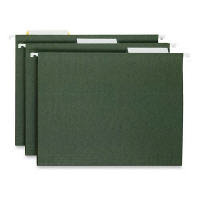 That was the question – Folders that is.

Getting Things Done strongly suggests that you NOT use the green hanging folders in your reference and project folders and I tried that. For about a year I’ve tried to just use plain folders in order. Sorry – That just doesn’t work for me. I found it difficult to find the right location to put the item, and problematic to even get things in the file drawer effectively. Even looking for something was slower as I had to work through the alphabet to get to the basic location.

So I finally gave up and went back to green hanging folders for all filing. Reference, Projects and everything else. It is just easier for me; easier to file something away - just label the folder, find the letter, and stick it in the folder. If the green folder is too full for that letter I pull an empty one from the front and stick behind the full one. It's easier to find things as well since I have labeled the hanging folders A-Z and I can jump to the most likely letter and scan until the next one. I know this isn't some magical solution but it just works better for me.

With this in mind the long weekend at least felt productive. I refiled everything, created a permanent reference filing cabinet, and used one for pure projects and re-re-reorganized things to clear off the desk, inbox, and my mind somewhat.

Otherwise it was a nice weekend following my Sister's trip to NYC via Twitter and TwitPic, enjoying the outdoors while not re-filing, and cooking out for the immediately family this evening.

Back to the real world tomorrow with a long Tuesday including management team meeting, crown replacement for my tooth, and a long evening meeting to boot. But Weds and Thurs are off to an OML conference for a small presentation and helping with a round table discussion on municipal websites... should be an interesting week.
Posted by Stephen Nolen at 9:07 AM No comments: