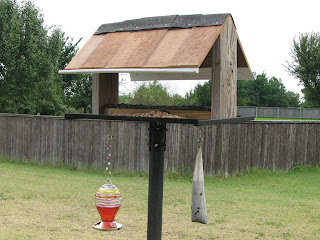 Having worked on Saturday to catch up from my 'Office Move' last week and spending most of the day Sunday outside, the weekend has flown by. I did get to do some 'for the birds' work done on Sunday though. The old bird feeder I had built several years ago was worse for wear and needed replaced so I built a new one with the same basic design. So far only the hummingbird, finches and sparrows are the only ones that have checked it out. It even has plastic guttering - although I may pull that back off. This is an 'improved' version with an aluminum floor that will not rot out and a cap to keep the moisture out.

Otherwise I spent the whole day working on @OUTSIDE context items including cleaning the patio fans and reversing the blades so they won't sag too much, helping Austin mow and enjoying the mid 80's temps. Much better than the 103+ that we were having there for a while. The battery died on the riding mower after Austin parked it... just wouldn't turn over even after re-charging and jumping. Put a smaller garden battery I had sitting around and it worked fine. New battery time already :-(. Now I have two expensive batteries to purchase since I want a new one for the TurboCoupe so I can move that weak one over to the old '87 F150 to get it started again and try to figure out what is wrong with it.

Well - On to another work week. Hopefully we will get Ryan setup in his own office now that I'm out and we can start fire walling time for each of us to be more productive daily.
Posted by Stephen Nolen at 6:31 PM