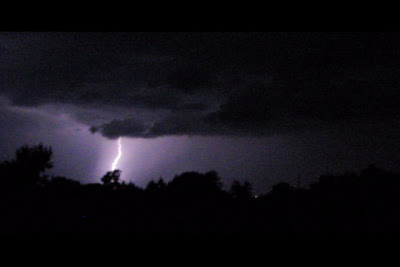 Well, yeah my biological mother is pretty awesome as well but the other night I watched Mother Nature put on an awesome lightning show before the rain began. First time I had just stood and watched old Mom do her stuff in a while and it was quite refreshing. First time I think I have ever tried taking some pics and video of a storm as well. Of course the pics just can't do any justice of being there, listening to the distant thunder, the patter and smell of the rain.

I used to never really think about rain or really appreciate it - well sure after 103+ degrees for a week or so you do 'appreciate' it but not like I should. A friend I know kind of changed that somewhat after talking about how she loves the rain. To me it's usually an inconvenience, to her it's a joy. To me I like to stay out of it, to her she likes to get out in it... I don't know, after watching that lightning I think I'll stay under the patio when it's raining around here but she is probably luckier than I am as well.

I have to say that so far this year August has been much different than I thought it would be. August is usually the hottest month in this area but I guess July decided to take that over this year.

I think I'll add 'Watch the Thunderstorm' to my GTD list and make sure I make time when the opportunity comes up again!
Posted by Stephen Nolen at 8:43 PM